When is Marijuana “Poison”?

When most people think of the Washington Poison Center, they do not immediately think of alcohol and drug prevention but associate us with Mr. Yuk and childhood poison prevention.  In fact, whenever we are part of a conversation people often ask, “So why are you here?”  The reason is simple; over the 60 year history of the Washington Poison Center the types of substances we are called about have changed.

Many people think the poison center is a resource simply to help parents whose children have gotten into household products like soap and bleach; however, roughly half of the 63,000 calls we now receive each year are related to alcohol and other drugs: over- the-counter medicines, prescription drugs, legal and illicit substances.  This means that we have lots of information on substances being used and health outcomes occurring across the state.

While every call to the poison center is confidential, we have the ability to detect exposure trends while they are happening.  More importantly, we share this trend information locally, regionally, and nationally with organizations working in prevention, public health, and policy, such as health departments and the Centers for Disease Control and Prevention.

When Marijuana is Considered Poison

Labeling marijuana or marijuana-infused products as “poison” has been controversial.  This often results from the misconception that for something to be a “poison” it has to cause serious health consequences or death.  It is not likely that someone who uses marijuana will have severe health consequences, but exposure to a substance is considered a “poisoning” once abnormal or unwanted side effects occur.

Over the last decade, the Washington Poison Center has received an increasing number of calls related to unwanted side effects of marijuana use, both intentional and unintentional.  In 2015, 46% of the 272 total cases of marijuana exposures involved youth ages 19 and younger (126).  Almost a quarter of these calls were about youth aged 13-19*, and more than half of all people exposed (172) were seen in a healthcare facility.

Marijuana affects each individual differently and, no matter how it is used, can cause unwanted side effects.  Moreover, these negative reactions can be more pronounced when marijuana is used in ways and amounts that were not originally intended.  The most frequently reported unintended side effects include drowsiness, rapid heart rate, and irritability. So are you likely to die from using? No. But, are there potentially negative health risks involved? Yes.

It is also important to know that synthetic marijuana products, known by names such as Spice or K2, do not have the same effects as natural cannabis. These artificially created drugs have been known to cause severe health effects. They are not marijuana! The Seattle Times recently reported on these drugs, and the article can be read here.

Whether you are concerned about adverse effects of marijuana, or want information about its effects on the body from health care professionals, you can reach out to the medical experts at the Washington Poison Center by calling 1-800-222-1222.  We operate 24/7 and are staffed by nurses, pharmacists, and physicians with special training in poison and drug exposures.

Parents are Key to Prevention

The conversation with your child about risks and effects can be difficult to start, but important for establishing healthy expectations.  Check out the Every Conversation Counts page from the Washington Healthy Youth Coalition for tips on how to answer these and other tricky questions.

*Since calls to the poison center are always voluntary, it’s important to note that our data cannot be used to say that marijuana use across the state is increasing.  All we can say for sure is that more people are calling to get immediate medical help. 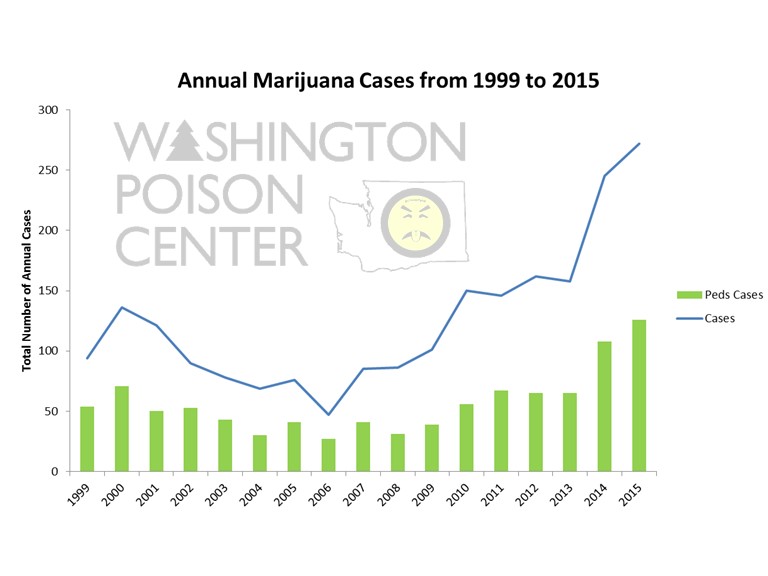